WaterEmpowerment was excited to accept the invitation from WASHAdvocates for the awarding ceremony that recognized the leadership of key Members of Congress for the Senator Paul Simon Water for the Poor Act of 2005. On March 12th 2014 a select number of Senators and Members of Congress were recognized for their efforts and were presented with an award. Dr. Natasha Conklin was present to represent WaterEmpowerment.
The event was intimate and heartfelt hosted by Mrs. Patricia Derge Simon, the wife of the late Senator Paul Simon who was the pioneer for the WASH program to address the significant water problems on a global scale.
There were very energetic speeches by the awardees and guests. Senator Durbin was passionate and informative with a focus on the future of WASH. Congressman Poe gave an engaging speech. Congressman Blumenauer speech was up beat and inspiring.
It was great to be in a room with people working on water sanitation and hygiene for the poor from so many different angles and levels. WaterEmpowerment is certainly doing its part and felt encouraged and supported by capitol hill that we are on the right track.
A big thanks to John Oldfield and the others at WASHadvocates. 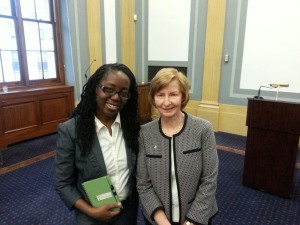